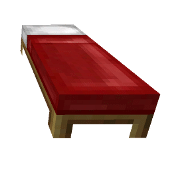 Beds are, of course, used to sleep in. They can only be slept in at night and will wake you up again in the morning. This is a great way to safely skip the night. If you go to sleep while it’s raining or snowing, the rain or snow will have stopped in the morning.

Beds are created using 3 pieces of wool and 3 wooden planks. You can use any combination of wool and wood colors to create the bed, which will always look the same.
Despite being made out of wood and wool, beds are not flammable.

Beds require 2 blocks to be placed on and will be placed with the foot end facing the player. They cannot be placed on transparent blocks, like glass and ice, nor can they be placed on snow.

Unlike doors and some other blocks, beds will not break when the blocks under it are removed. This means you can place glass, ice and other transparent blocks under it after you’ve placed the bed. This trick is also used by many players to create bunk beds, though often only as decoration.

Beds can be placed next to each other, though they will not merge together.

Beds will block the flow of water and lava, but they cannot be placed in water or lava.

You can only sleep at night, though only when the surrounding area is clear of hostile mobs. If there is any hostile mob within 10 blocks from the bed, even outside the walls, the message “You may not rest now, there are monsters nearby.” is displayed.
This is to prevent monsters from ambushing you at night.

After you sleep or lay in your bed, your respawn point will be set to that bed, but only for as long as your bed remains in that same position. Removing it and dieing without sleeping in another bed will spawn you in your original spawn point with the message “Your home bed was missing or obstructed.”

Despite the fact the game skips part of its day/night cycle, ongoing processes will not be sped up. Food left cooking in a furnace or potions left brewing in a brewing stand will pause during your sleep.

While in bed, it’s still possible to eat, open your inventory and interact with your surroundings. Though because the screen turns black this becomes quite difficult to do. This is easier on multiplayer servers as sleeping alone will not work.

It’s impossible to sleep in the Nether and in the End. While it’s perfectly fine to place a bed, trying to sleep in it will cause the bed to explode and set the surrounding area partially on fire. This explosion can easily kill you, even if you’re wearing armor. This is because the End and the Nether have no day/night cycle, so there’s no time that can be skipped.

It’s possible to sleep on multiplayer servers, but only if all online players in the Overworld sleep in a bed at the same time. This requires some coordination which is often close to impossible as many players either don’t want to skip the night or they like trolling the others.