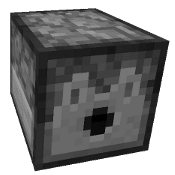 Dispensers are blocks which will drop or shoot an item when it receives power. It will only shoot once per power input, so a repeating input will have to be created to make it shoot more than once without the player’s input. Dispensers are created using 7 cobblestone, 1 redstone dust and 1 bow, but any durability loss on the bow will make the bow unusable for dispenser creation. Even though enchanted bows can be used, the dispenser will not take over this enchantment, so you’ll only waste your enchantment.

A dispenser has 9 inventory slots, which can be accessed by right clicking it. The items placed in it will be shot out at random. Only arrows, chicken eggs, fire charges, snowballs, splash potions and bottles o’enchanting will be fired in the same way as if they’d be fired by a player, with the exception of fire charges which cannot be fired by a player. The items will keep their effects, so it’s possible to use dispensers as a semi-automated chicken farm through the use of eggs. All other items will simply be dropped.

Fire charges will turn into fireballs and are fired in a straight line, setting whatever block they hit on fire, including mobs and players. Arrows will harm players and mobs and can be picked up again. Any mob that’s killed by dispensers will not drop xp or their special drops, like blaze rods from blazes.

Dispensers can be used somewhat as a games of chance, as they shoot the items in their inventory randomly, but this is only determined by the amount of stacks, not the size of a stack. If you put a stack of 64 cobblestone and a single diamond in the dispenser, there’s a 1/2 chance it’ll drop cobblestone and 1/2 chance it’ll drop diamond, not 64/65 chance of cobblestone and 1/65 for diamond. This means dispensers can only be used in a similar way to how dices work, by simply assigning numbers or names to the items inside. This way you can “roll the dice” to determine who gets to chose what you do next or who gets to keep the Ender dragon egg.

Note that while dispensers can also be used for gambling games, we don’t encourage gambling (in minecraft) in any form, it will often only lead to misery, especially since many young people play minecraft. If you do build some form of gambling game, make sure to make the stakes quite low. Any players risking their items in a gambling game should realize there’s often a high chance they’ll lose, some games might even be rigged.