After the explosive popularity of my flying creeper and pig, people started to ask me how I made those wings. It may seem impossible to start building these enormous wings, but they’re quite easy. In fact, the wings on the creeper are the first wings I’ve ever built. Of course, if you’re not an experienced builder (especially terraforming), building the wings can still pose a big challenge, but this guide should help you a lot.

In this article I mainly cover the angel-like wings of the flying pig, but the same rules, guidelines and tips and tricks apply to pretty much all forms of wings, as shown by the other examples in this guide.

By far the easiest way to start building your wings is to first create a 2D outline of the wings you want. This will give you a good idea of how big your wings will be, how far they stretch and you’ll be able to make some easy and quick changes to your design.

Of course, the design of your wings may be the biggest challenge, because how do you build the shape of specific wings? Experienced builders, pixel artist or other people who work with graphics a lot will probably be able to build a good wing shape, but for those who don’t know how to do this, there’s a very easy solution.

Simply copy an existing wing design. This will of course only work for 2D images, but that’s exactly what we’re after. Simply search Google for any images of wings, preferably pixel art wings. Pokemon and other such programs often have very simplified pixel versions available, which can be copied quite easily. Make sure you find an image with clear pixels, as you will copy those pixels in minecraft by replacing each pixel with a block, as seen in the image below. 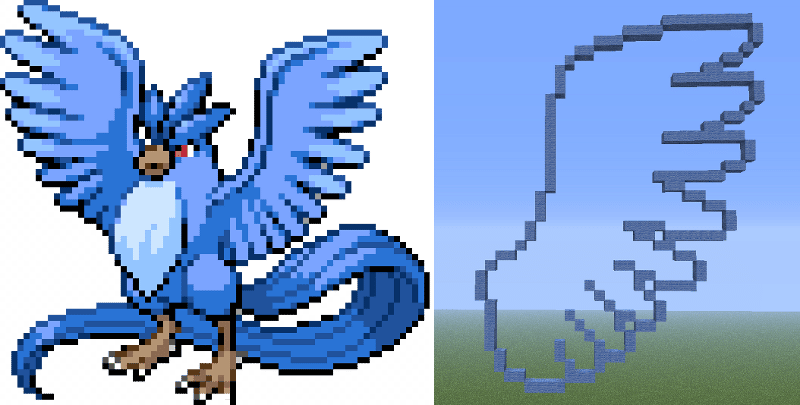 Also make sure the wings are positioned as much towards the front as possible, as any sharp angle will make the minecraft version look weird, unless you extend the wings yourself of course.

Now that we have our 2D outline it’s time to turn it into a 3D wire frame-like structure. This will be the base of our entire wing and it will pretty much define the end shape of our wings, though I often make little changes while I finish the wings.

Creating this 3D wire frame is very easy, all you do is change the position of the blocks of our 2D outline. However, make sure you use the right positions for each part of the wing. The top of the wings will usually extend outwards, while the bottom of the wings will generally float with the wind towards the back.

Also keep in mind that each wing section (feather or otherwise) usually overlaps the other one, so also change the positions of those blocks, this will make the end result look less flat.

In the image below, the pink and red layers of wool show the original position of our 2D outline.

Once you’ve finished this 3D wire frame the result is already taking shape and you can start to see how it will look. However, the real challenge starts now, as the next few steps will have many moments in which your wing will look horrible and odd, but don’t get discouraged, simply keep going and the wing will start to look good once you reach the end.

Add a Layer of Depth

Simply filling in all the emptiness in our wings will make it look flat and horrible, so we have to add depth and make sure everything overlaps quite smoothly into each other. This isn’t a difficult process, though it can be time consuming and frustrating, especially when it seems your wing is only starting to look worse and worse, but stick with it, it’ll start to look good as we progress.

I usually first start to go around all the edges of our 3D wire frame and extend it inwards by 2 blocks, but 1 block deeper than our edge. This will look quite odd once you’ve done the whole wing, but this is a good step to find out the problem areas in the wings, which are usually corners and places where 2 different depths meet.

Some parts of the wing won’t look right if you use a layer that’s 2 blocks long, so I use 2 layers of 1 block, each time going 1 block deeper.

After you’ve finished this step it’s time to smooth things out a little. Make the problem areas look better by making the transitions between the different depths easier. People who terra form (build landscapes) in minecraft will find this quite easy, but make sure you follow the shape of your wings, we’re building a wing not a mountain.

The wings will begin to look quite good now, though we’re far from done.

A single layer of depth is not enough to make the wings look impressive and less flat, so we continue to build upon our depth by adding another layer. The length of this layer hugely depends on the shape of the wings, but the top of the wings usually have longer, more gradually increasing depth layers, while the wing tips and other feather-like parts of the wings will have a depth increase pretty much every 1 or 2 blocks.

For now we simply extend the wing by another 2 blocks, at an increased depth. The next step will determine our maximum depth and the overall shape of our layers.

We can’t really keep adding layers upon layers of depth, this will make the wings look weird and horrible. So we set a specific towards which we build all our layers. The depth won’t be the same for all our layers, as the further you go from this layer, the deeper it will be. However, this will make the wing look more impressive and makes it seem a little like it’s part of a moving creature.

To create this maximum depth I usually create a large canvas towards the top of the wing, usually about 4-6 blocks deeper than our outer most layer, though again, this depends on the shape of your wing. Some may only need 3, while others could do with 7 depth layers.

However, the shape of this canvass should follow the general shape of your wing, it doesn’t have to be exact, but a circular shape will look horrible on an angel-like wing, just like an angel-like shape will look weird on a bat wing. The length of this canvas is about 25-50% of your wing, it usually ends where the first feather-like wing tips start.

Now that we have determined towards which point we build our wing, all we have to do is actually build towards that point. This step isn’t too difficult, you simply repeat step 4 until you’ve finished all parts of your wing.

Once you’ve connected everything, the wing may seem a little odd, which means you’ll have to smooth parts of the wing out a little by changing depth layers and generally making all the layers part of the whole wing, rather than separate parts of a collection. Smooth out any changes in depth by making the change more gradual or perhaps steeper in some places.

Play around and experiment with it until you’re happy. If you really can’t get it to look right, simply burn it down (if you used wool), enjoy the fire and start over. Practice makes perfect.

While making your wings look smooth, make sure the depth changes don’t occur at the same places on each layer, instead, add a few blocks to extend one layer, or part of a layer, to make everything look more natural and smooth, as seen in the image below.