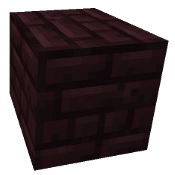 Nether brick is the main block used in Nether fortresses and can only be obtained by mining them with a pickaxe. A minimum of a wooden pickaxe is required. Diamond pickaxes are recommended for their speed, as even an iron pickaxe will take a while to break this block. Like other stone blocks, nether brick has a blast resistance of 30, which means they cannot be destroyed by the ghast’s fireballs.

Besides being used as decoration, nether brick is used to create nether brick stairs and fences, which can also be found in nether fortresses. Despite being much easier to aquire in large quantities than normal brick and other stone blocks, most players tend to ignore nether brick due to its dark look. They’re often only used for Nether castles and other structures in the Nether as they tend to blend in better, but people often need other blocks to add details to rooms, which usually don’t blend in well with nether brick and the Nether.