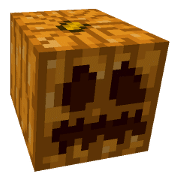 Pumpkins can be found in small groups in most biomes. They do not spread like mushrooms, making their numbers quite limited. A pumpkin can be grown from pumpkin seeds, aquired from either harvesting mature pumpkin stalks, crafting pumpkins into seeds or from chests in abandoned mineshafts. Destroying mature pumpkin stalks can drop up to 3 pumpkin seeds, earlier stages have a chance to drop a seed, but it’s usually better to wait. A pumpkin will always be carved, even if it’s grown yourself.

Endermen can pick pumpkins, as well as snow and iron blocks, this means they could construct snow golems and iron golems, though it’s very rare for this to occur and often requires at least some player input. Pumpkins cannot be pushed or pulled by pistons, instead the pumpkin will drop as an item. This is very useful when creating automated farms.

Unlike melons, pumpkins cannot be eaten. But pumpkins can be used to create jack-o-lanterns, iron golems, snow golems and they can be worn on your head. It’s possible to wear a pumpkin on your head, but it gives no armour bonuses. The pumpkin will limit your view, giving you a view frame in the shape of the pumpkin’s face. Note that custom texture packs may have altered or completely removed this feature. On top of that, wearing a pumpkin will allow you to directly look at Endermen, without causing them to attack. This is extremely useful in the End, which is filled with Endermen, but may prove disastrous in the Overworld, where finding creepers is hard enough as it is. People often use pumpkins and jack-o-lanterns as fake humans or training dummies, by placing it on top of a fence pole and attaching levers to each side of the pumpkin.

Pumpkin stalks have 8 stages of growth from planting to maturity. The first 7 are all green and vary in size. The last stage is brown, which makes it stand out a lot. Pumpkin and melon stalks look exactly the same, which can make it difficult to extinguish one from another, but pumpkin stalks will only attach themselves to pumpkins. Note that custom texture packs may have made all stages the same colour, which makes it difficult to tell if a stalk has fully matured. Bonemeal can be used to instantly grow a stalk into a fully matured stalk, but cannot be used to instantly grow pumpkins.

The basics of growing pumpkins are very simple. Pumpkins will grow faster if the stalks have more spots they can spawn pumpkin on. This is only useful for frequent harvests though, as any adjecent stalk attaches itself to a spawned (or placed) pumpkin, meaning up to 4 stalks can be attached to a single pumpkin. All those stalks will stop trying to spawn another pumpkin.

If you’re looking for high yields without having to harvest often, the best thing is to make sure the pumpkins can only spawn on 1 or 2 spots, preferably in rows to prevent other stalks from attaching themselves to the same pumpkin. There are various ways to farm pumpkins, both land efficiently as time efficiently, as well as fully automated. We’ve covered those methods in a seperate guide, right here.