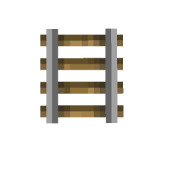 Rails are blocks on which minecarts can travel, which could greatly decrease travel time if used well. Rails can be found in large number in abandoned mineshafts, but they can also be created with 6 iron ingots and a stick, which will create 16 rails. There are 2 other types of rails, detector rails and powered rails, each have their own function.

Rails can be broken without using any tools, but using a pickaxe is the fastest. You could also break the block under the rails, which will also break the rails and drop it as an item. Water flowing against the tracks will cause the tracks to pop off the blocks as an item, which makes collecting huge amounts of rails fairly easy in abandoned mineshafts.

Tracks can only be placed in straight lines, not diagonally, but it’s possible to create turns (corners) and they can be placed on 1 block high slopes. Simply placing a rail next to another rail will attach them to each other, if one of those rails is already part of a track, the rails will form a curved corner piece. If more than 2 rails are created as an intersection, only 2 of them will actually attach themselves to each other.

Rails that lead to other rails, but aren’t connected to it, will still allow minecarts to continue as it’ll go over the gap, though the reverse isn’t possible. Minecarts will always follow the connected tracks, so careful planning is required when you want to create a large system of interconnected tracks.

Minecarts traveling off of tracks will continue to travel for a few seconds, if they fall on top of other tracks they’ll simply continue their journey, no matter how high the fall is. This is often used in rollercoasters created with minecarts and rails.

The direction of corner pieces can be changed by supplying it with any form of power. Detector rails provide an excellent way to do this.
The rails will change when they receive power and stay that way untill they receive power again, so turning off the supply will not turn them back to their original position. By using a detector rail before the turn you can alter the direction of a sequence of minecarts, either to seperate the goods in a minecart chest or to get rid of any person who tries to follow you.

To compare, traveling 100 blocks once would take only 12.5 seconds with a minecart, 17.8 seconds if you could sprint all the way and 23 seconds if you walk. This probably doesn’t affect you much if you only have to walk it once, but if you’re harvesting large amounts of items you wish to keep, minecarts will greatly reduce the time it takes to travel and increase your safety as you’ll most likely won’t have to deal with monsters.

Besides their travel use, rails can also be used to create rollercoasters. Powered rails and detector rails allow for boosts, stops and other special effects. By using the ability to fall onto rails, it’s possible to create acrophobia (fear of heights) inducing drops.

Rails are also offer an easy way to create traps by simply leading it into lava or other deadly traps. Note that players can simply click the minecart to get out of it, so make sure you place the trap out of sight, behind a corner for example.