Here’s our opinion on what are the 7 best weapons in Evil Dead: The Game!

Having said that, the game offers different kinds of weapon rarities i.e Legendary, rare and common respectively. It is only natural that a higher rarity weapon will do more damage than a common one. However, for the sake of this guide, we will only be comparing the common rarity of these weapons.

These are the best weapons in Evil Dead: The Game.

In this guide, I will be taking you through an in-depth tour of the best there is when it comes to weapons in Evil Dead: The Game. On that note of that, let’s jump in and get started!

Starting with a Sledgehammer it is a given that something of that size and mass will provide you with a bigger impact. However, that is the only pro about this weapon. The hammer itself is heavy and feels sluggish in execution which can end up jeopardizing the safety of your character.

Therefore, if you are looking to equip this weapon just remember that, you are nothing but a glass cannon.

The Chainsaw is the highest damaging melee weapon tied only to the Lumberjack Axe. With that said, this weapon also falls victim to the same sluggish attack style as a sledgehammer. So if you are planning to choose this gory machine of death as your weapon, you better run for the hills when you miss a shot.

The first range weapon entry on this list is none other than the Revolver. Essentially the revolver does everything that a Pistol does but better. It can dish out a good amount of damage with ammo that is easily accessible making the revolver a solid pick.

However, do keep in mind that you need to land those headshots if you are planning to do some serious damage.

Is it even an Evil Dead game if you are not blowing your enemy’s head with a Shotgun. This gun has to be one of the most satisfying guns in the game. Combine this satisfaction with the damage this gun can do, and you got yourself one of the best weapons in the game.

However, the continuous need for reloading and scarcity of shotgun ammo on the map can put you in a sticky situation.

If you are someone who loves to keep their distance from their enemies, then this gun is meant for you. The Hunting Rifle has the longest range in the game, hence allowing you to play safe.

Apart from the range, the Rifle also provides you with on par damage to a Shotgun which ends up making the Rifle even more formidable. However, the weapon only has two shots in it so you better make each shot count.

There is no other weapon in the game that even comes close to Blunderbuss when it comes to area damage. The gun has such a huge spray that it makes it impossible to miss your target with this thing.

With that said, the amount of damage and range Blunderbuss possesses makes it impossible for us to not recommend this weapon.

When it comes to survival games it is only natural that some weapons have an edge over other weapons, call this poor balancing or a part of your user experience. Nonetheless, we have gone through the hassle of testing out all of these weapons and listed the best of the best for you.

You can buy the game on the Epic Games store page here.

Looking for more guides? Check out our Evil Dead: The Game page. 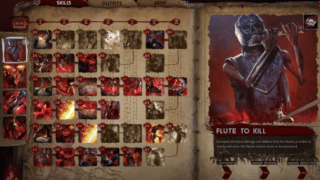