Here’s our How Tall is Sundrop FNAF guide. If you were wondering how tall the Sundrop character is in FNAF, then we’ve got the answer for you!

The latest installment of Five Nights At Freddy’s brings in some new interesting characters that the player has to face during their journey. Some of these characters have become fan favorites ever since the game was released. One such character is known as Sundrop. Since first seeing this character, the FNAF community has been keen to know his exact height. That is why this guide will show you how tall is Sundrop in FNAF: Security Breach.

How Tall is Sundrop FNAF

Sundrop is speculated to be anywhere around 6 feet to 7 feet. Since the developers have not revealed the official height, fans have taken it upon themselves to find this out by measuring him with various objects around him.

If you are new to the FNAF games, let’s find out who Sundrop is and why fans are excited to know about his height out of all the characters. With that said, let’s dive right in and find out how tall is Sundrop in FNAF: Security Breach.

Sundrop – or Sun/Moon – is a new character in FNAF that was introduced in the latest installment. He has two phases, the Sun and the Moon. When the lights are turned on, he will act as the Sun but when the lights turn off, he will become the Moon. You have to navigate around this character to turn on the lights when he becomes the Moon so that he will stop hunting you.

While in the Sun form, he follows the rules strictly and isn’t as scary as his other personality. However, when he morphs into the Moon, he becomes quite abrasive and starts hunting the player. His demeanor also changes and he becomes more intimidating and out of control.

How Tall is Sundrop?

Now that we know who the character is, let’s talk about his height – and why fans are interested in it. Since he is a new character, members of the community have been keen to know how tall he is. This is mostly done to update the Wiki of the game and has accurate information. Plus, FNAF fans are quite involved with the entire Five Nights universe and they theorize about everything.

Due to this, a few fans started measuring the height of this latest character on TikTok. Eventually, the clips got viral, and more and more people wanted to know the real answer. While the developers have not released an official statement regarding this, fans have speculated that Sun/Moon is anywhere from 6 feet to 7 feet tall (182.88 – 213.36 cm).

This information was deducted after he was compared next to Gregory – another character in the FNAF universe. While we do not know the exact of Gregory as well, he is estimated to be somewhere around the 4 or 5 feet mark. Since Sundrop towers over Gregory, that is where his height is derived from.

Another reason for the interest in this character’s height was due to his spectacular design. He has two personalities which can be seen by the sun and moon on his face. However, he only acts as the Sun when the lights are on and he will only morph into the Moon if the lights turn off. Due to this interesting character design, fans made tons of fanart for him. He quickly rose the ranks in popularity and is now one of the fan-favorite characters of the entire series

Five Nights at Freddy’s can be played on the Google Play Store and the App Store. 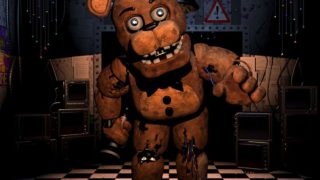