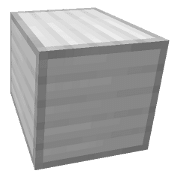 Minecraft Block of Iron is created by placing 9 iron ingots in a 3×3 square on a crafting table. They’re the only mineral block that have a use, other than being able to turn itself back into 9 iron ingots.

Blocks of iron require a stone, iron or diamond pickaxe to be mined, using anything else will destroy the block, including the 9 iron ingots used to create it. Despite being solid iron, blocks of iron have the same blast resistance as stone, leaving them vulnerable to explosions.