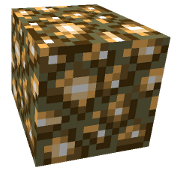 Glowstone is a block only found in the Nether, where it can be found in groups of about 10-25, though larger and smaller is possible. Glowstone always emits a light of light level 15, which is 1 higher than that of torches. Glowstone can be broken with anything and will drop 2-4 pieces of glowstone dust.

Due to the general shape of the Nether, harvesting glowstone can be very tricky. It’s often hanging high above the ground, sometimes hanging above or in lava flows. Most people simply build a large pilar by standing on a block and placing more blocks on top of it while jumping, though this is very risky in the Nether, as a single attack of a Ghast’s fireball can knock you off, or break the surrounding netherrack and glowstone blocks, which could be supporting a lava pool. It’s often advised to make at least a fireball proof shield around the glowstone if you’re exposed to any attack of a ghast or blaze. All stone types are resistant to the ghast’s fireball explosion.

If you’re feeling more adventurous, the ghast’s fireballs can be redirected by hitting them.
Shooting them towards glowstone blocks will break them, making it a little easier to harvest them while still paying attention to the ghast’s attacks. Though it’s advised to build a stone platform to stand on, as the fireballs will both destroy the netherrack and set some of it on fire, which have to be put out manually.

Unlike torches, glowstone can be placed underwater and because it looks better than jack-o-lanterns, glowstone is most commonly used in underwater landscaping. Glowstone is also used a lot as lampposts by placing it on top of one or more fence posts. They also serve as great beacons to direct you home, especially at night, though torches often work just as good and more easily available.