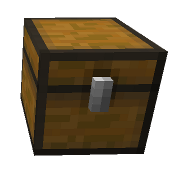 These chests were once part of the game and were used as an April fools joke. The chests would lure players towards it, especially at night as it emits a light level of 15, 1 higher than that of torches. When a player tried to open the chest, a message would pop up which would lead them to a temporary story which “sold” fake items. There were 8 fake items you could “buy”, ranging from a simple crate key of $3 to a “Response from Support” costing $494.

Players who would try to buy an item by clicking the “proceed to checkout” button, a large picture of a Velociraptor would pop up and start to scream loudly. Players trying to buy over $10.000 in items would be asked if they were prone to seizures by a pop-up, if they are, players were asked to click cancel. Clicking OK would cause the screen to flash in bright colors.

On April 2nd, the store was updated and played “Never gonna give you up” by Rick Astley, so anybody going to the page would be Rick Rolled. In addition, a large banner reading “April Fools!” was added to the page. Locked chests remained part of the game until April 5th, after which they would no longer spawn in-game but were still available in inventories, but all placed chests were removed from the game. The chests in inventories would remain there until the player tried to place it in game, which would automatically delete it.