Here is our complete Diablo Immortal: Shadow War guide. Learn about what the Shadow War game mode is and how to participate in it.

If you’ve reached the endgame of Diablo Immortal, then worry not, as there are still various other activities that you can take part in. The game has many end-game activities, such as the Paragon leveling system or the Shadow of Rife that branches off into even more game modes. Among all of those is the Shadow War PvP Tournament which we will be discussing in this guide.

What is Shadow War in Diablo Immortal?

Shadow War is essentially a weekly PvP tournament system in which teams undergo a bracket system as they face off with each other.

Teams of up to 90 can take part in a Shadow War at a time, and the one that wins moves on to the next match. Ultimately, there will be just one winning team in the bracket which will then be considered for the top 10 teams that can participate in Rite of Exile.

Rite of Exile is a game mode that lets the Shadows get a chance to become the Immortals of the server. Therefore, if you’re looking for a way to overthrow the current immortals of your server, then Shadow War is the way to go.

How to participate in Shadow War in Diablo Immortal?

There are a few prerequisites before you can take part in the Shadow War. First and foremost, you must be a member of a Dark Clan. Being part of one requires you to join the Shadow Factions through the Shadows Lottery in Westmarch. Alternatively, you can be gifted an Ameba’s Signet from an existing member to get invited into the clan.

However, there is also a level requirement. You need to complete the Baleen quest line and reach Level 43. Doing so will let you obtain the Timeworn Scroll from the Ancient Arena, which will finally let you make your way into the shadows.

The Different Modes of Shadow War

Now that you know what Shadow War is and how to take part in it let’s dive into the details. In Shadow War, there are two different modes/battles. One is the Main Battle, and the other is known as the Support Battle.

Theoretically, to win, all you have to do is win the Main Battle. However, winning the Support Battles also gives you an advantage in the Main Battle and can help you gain victory. Therefore, let’s explore each of these modes in more detail.

The most important part of the Shadow Wars is the Main Battle. Each team will have a “Team Leader” whenever they’re going into the Shadow War. The leader will go through an epic cinematic in which they will be turned into a giant immortal.

Now it is the other team’s job to send out enemies to take down the leader. However, taking down the immortal leader is not that simple as they have various skills that can be used to crush any incoming enemies. The leader has abilities like bringing stone structures to life for aid as well as powerful sword swings and stomps.

While all of this is happening, your own team will also send out its other members to take down the other team’s immortal leader. The leader that gets taken out first loses the Main Battle and the overall Shadow War.

There are two Support Battles that go on alongside the Main Battle. 30 people can go in one Support Battle, and they will have to face an NPC Immortal Giant.

As the immortal in the Support Battles is an NPC, you will have a relatively easier time against it. However, you should still be careful as it can still dish out a lot of damage. It is worth noting that if you die in Support Battles, you can respawn as long as your leader is still alive.

Additionally, every Support Battle that you win will make your Immortal Leader stronger and deal more damage. Therefore, if you want to win the overall war, you should aim to win the Support Battles as well.

With that, you know everything about Diablo Immortal Shadow War. It’s a fun PvP mode, and if you want a chance to take part in Rite of Exile, then Shadow War is the way to go.

Diablo Immortal can be played on the Google Play Store, App Store, and Battle.net. 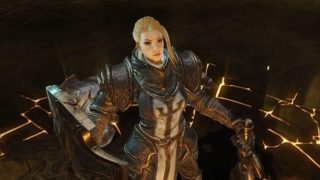