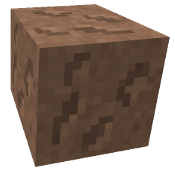 Minecraft Brown Mushroom grow in caves, swamp biomes, the Nether and can sometimes be found in other shady areas. The brown mushroom is often easier to find than red mushrooms, but both can be quite hard to obtain without farming them. Red mushrooms are more common in mushroom biomes, but these biomes are rare and hard to find.

Mushrooms can be harvested by simply hitting them, there are no specialized tools for this job, but using water or increasing the light level can help speed up the time in which large quantities can be harvested. Mushrooms can only be planted in light levels under 13, except on mycelium, on which they can always be planted. They require no farmland nor hydration, just enough room to spread around.

Using bonemeal on a brown mushroom will create a brown huge mushroom. These can be harvested and will drop more brown mushrooms, allowing for a very fast way to farm huge quantities in a very short time. These giant mushrooms are often used as a quick house, especially the red giant mushroom, as it has a hollow shape, while the brown huge mushroom is mainly flat on the top.