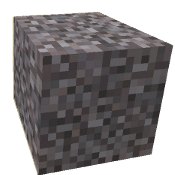 Gravel is one of the only blocks affected by gravity, causing it to fall untill it’s supported by another block. If gravel falls on a transparent, partial block, like torches, redstone dust or levers, the gravel block will be destroyed instead and turn into a resource block which you can pick up. Note that with this method, gravel will only break into gravel blocks, it will never change into flint. This can speed up harvesting gravel, by simply placing a torch under a block supporting the gravel and then mining that block, all the supported gravel will fall on the torch, break and turn into gravel resource blocks.

Gravel falling onto cobwebs will be slown down, which could be used as a timer, though better methods are available, like redstone repeater circuits. Gravel can sometimes by found floating in the air, which happens when the world is created. Players can stand on it, but mining any block around it will cause all the gravel blocks around it to drop. There’s a famous challenge, seed 404, in which players have to dig a patch of gravel which will fall into a deep cave. The player will then have to survive for as long as possible. ‘Standing’ on falling gravel will not prevent the player from taking falling damage, nor will it decrease the amount of damage the player takes.

Harvesting gravel will result in a gravel block, but there’s a 10% chance gravel will drop flint instead. In this case the gravel is destroyed. Flint is used to make arrows and flint and steel, though due to their similar shape, size and colour, it’s often confused with coal. Shovels are the best tool for harvesting gravel, but due to the speed of even stone and iron shovels, diamond shovels are often considered a waste, especially if the player doesn’t have many diamonds to spare.

The falling property of gravel can be used in many ways. One such way is suffocating monsters and player. By blocking them in and dropping gravel above them, the player or mob will get stuck inside the gravel blocks and start to suffocate immediately. Gravel can also be used to fill up lava lakes. By simply placing gravel on a block above the lava, it will fall and fill up a space in the lake. This is a safer method than using the shift key to hang over the edge of a block next to lava.