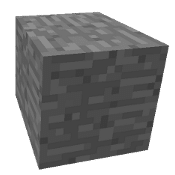 Stone, which is often referred to as default stone, smooth stone, natural stone, and normal stone, is the most occurring block, besides air, in the minecraft world. Stone can be found naturally in all levels in which blocks are spawned. It is often at least 4-6 layers deep, covered by sand, dirt and/or grass, but the exposed rock is quite common in the form of cliffs, basins, and mountain sides.

Mining stone requires at least a wooden pickaxe, but will always result in a cobblestone block. It is possible to harvest stone blocks by using the silk touch enchantment, though this is often considered a waste of the limited durability of this rare enchantment.

An easier way to get stone is by simply smelting cobblestone in a furnace. The large amounts of both stone and coal make this quite easy, especially when multiple furnaces are used to cut the waiting time.

Stone is required in several recipes and is often only used for this. Many players prefer the look of cobblestone, stone brick and other stone types over the look of stone. Stone often looks too much like a cave, rather than a normal building or castle. In addition with the extra effort required to create stone, this block is often ignored when building anything in survival mode.

Silverfish are capable of entering and hiding in stone, which changes the properties of this stone, but not the looks. Breaking this new type of stone will set the silverfish free, which will attack you and call upon other silverfish who might be hiding in the surrounding stones. Luckily, Silverfish only appear naturally in strongholds.