This is a Blue Archive beginner’s guide made by Logi (Logi#1796 on Discord). Massive thanks to them for putting this together! It’s designed to get you ready for global release so that you know exactly what to do on launch day.

Welcome Global Sensei! Congrats on the launch of Global!

I’d like to welcome you to Kivitos, a vibrant and exciting academy city. This guide is assuming Blue Archive Global is starting with the same roster that JP started with.

Alright, I’m tired of the formalities. Time to meme.

Also just a warning: I don’t know how to reroll since I didn’t do it myself, so I would advise you to look up a guide on how to reroll especially since it might be different for the Global version.

So after completing the tutorial mission, you will be forced to play through Half of stage 1-1. This is when the first 10 pull occurs (as of the time writing this it is unknown whether or not this pull will come with a guaranteed 3-star) in this pull you are guaranteed a 3-star unit which is the highest *base rarity.

I’m gonna mention the characters I think are notable enough to warrant a reroll. THIS ONLY MATTERS FOR 3-STARS

Oh yeah, in Blue Archive there are two types of characters:

Essentially, Strikers are the characters you actually see running around during gameplay, if they die, you die.

While Specials are the characters who aren’t visible but provide different supportive characteristics to the Strikers.

Teams are divided into 4 Strikers and 2 Specials.*For the remainder of this guide I will point to Strikers with red arrows and blue for specials.

Easily one of the best in a majority of endgame content. If you were to give her a rating out of 5 stars how she performs overall? Easily a 5 outta 5.

So in the base game of Blue Archive there are like 3(4?) strikers that do Blue damage, and Haruna is one of them. Holy is she good, High damage and high damage and more high damage. She’s just crazy.

She has an ability which gives ability energy so characters can begin to use their EX skills faster. This is awesome for PVP, she’s mostly in this list for PVP lovers but she is just generally good and does awesome in PVE.

Someone thought that giving this dog a mortar would be a good idea. But after some consideration I actually agree. EX skill does bussin damage, and her other skills are also fire.

Easily the best tank in the game, she is the only tank who also has the most skills akin to a traditional tanking character, Damage Reduction + Heals + Taunt. You wanna make her 3-star asap to get her main damage reduction skill.

She has one of the dumbest kits, she has two of the same skill. Which are both damage steroids. She just does damage, I can’t say much more.

Another great damage dealer. Works better in places where she can sit still more since her EX skill is a main ATK buff for her. Also she’s a sad cat so if you like sad cats, then she’s perfect for you.

She’s a main debuffer for some content. She’s not gonna be doing amazing damage but she will help others do very good damage. Her EX skill is an Armour Break, simple as that.

Gonna be a main want for Blue damage, but is another unit who will be okay until you get her 3-star wherein she becomes good. Her final skill is a DOT that helps her damage a decent amount.

Okay, Serina is the best special healer in the game due to low cost EX skill, along with a passive heal every so often. She is important to not overlook. She looks hella generic, so it’s understandable why you would.

She is the only specialist who is purely based around buffing your team. Her EX is an ATK boost, and her passive is also an ATK buff for allies.

She essentially sees use in one place. She’s not worth fretting over, but do not ignore her. She has amazing DPS but requires investment, luckily she has a decent amount of Hard Stages you can farm.

No descriptions, just know that they are good.

What about the Starting 4?

Hasumi: She is good, but there are just better options out there. Mostly a budget/waifu pick. Not bad by any means. Hits hard and does her job, has a semi-weird kit.

Yuuka: A solid tank, relies on being more of a run and gun kinda person. Essentially a cheap solid unit. Her final skill heals her when she takes cover, which is cool.

Chinatsu: She has a very strong single-target heal. She’s a healer, I don’t know what else to say. She suffers from needing investment to become stronger, which is the case for most of the 1-stars.

Suzumi: Ahhh, well, I mean she’s got a flashbang. She also is inclined to throw said flashbangs at innocent people in public. Just has a weird kit and suffers from that weird kit not being particularly useful in any scenario currently in the game.

This is just a list of what I try to do every reset OR when I wake up in the morning since reset is actually at noon for me.

Usually by this time it will be around noon, if I’m out of energy I usually just close the game until after reset.

*affection on characters in cafe is claimable every 3 hours~

*side note: if you haven’t done PVP at all before or just unlocked it; Do it. You get free pyroxene for your first time climbing the ladder.

Welcome to the Cafe! It’s a place for the students to come hang out and relax. Look at their little cute chibis! Ah かわいいね!

You’re a Sensei now, and that means you have sensei-responsibilities a.k.a Scheduling. This is essentially just a way to get more affection as well as a chance at skill books/CDs.

Remember to Always do 5 PVP runs for the day, even if you lose and even if it feels like a slug. There is a reward for doing “x PVP matches in a day”

Armour and Damage Type, Gun Type, Role, and Tendency (some characters will actively seek out cover vs. some who stay in open).

Armour and Damage Type refer to the type (colour) of a character’s Damage or armour.

This changes how they:

There are two extra damage types and one extra armor type

Normal damage is the name for damage without a colour coding, this is the damage type that most enemies will deal in PVE.

THIS MEANS YOU ONLY HAVE TO THINK ABOUT ARMOUR TYPE IN PVE SINCE ENEMIES WON’T DEAL INCREASED DAMAGE TO YOUR CHARACTERS.

And finally there is something called Terrain it has its own separate armour type which resists all other colours of damage.

Based on that, thinking about terrain currently is pointless.

Armor types follow the same coding, minus the normal and terrain type.

PVE enemies only have an armour type so all you have to do is match the Damage colour of your characters to the armour type of the enemies.

When an enemy has:

Simple right? Yeah, it is.

Matching the Types causes the damage to do a +30%

Using it against the armour which neither resists or weak causes it to do nothing.

The different Gun types behave differently in this game and determine somewhat how the characters behave.

The Specials might have weapons assigned to them but it doesn’t really matter since you never see them.

**except in the case of people like Hibiki, Karin, Mashiro who interact with the Strikers by using their weapons.

Each character has a “role” which somewhat describes the way they’re intended to be used.

>Tactical Support: *there is only one so far, but this seems to be people who can summon vehicles or armaments. Since S.Hifumi can summon a Tank.

Refers to where a student will tend to stand:

Students can range from

If a student goes into a stage with BOTH Damage advantage (Red vs Red armour) and Excellent Terrain rating, they will have a total of +50% Damage.

It’s an academy city after all. Think of it as one major city (Kivitos), with different minor cities within it. So each school is both a School and its own ‘city’ in a sense.

This is the first school we meet in the story as a Sensei, they are also in all the marketing and Shiroko is the mascot of the game. This school and the city area within its reaches are literally turning into a desert, this is why there are only 5 students remaining in the school. These 5 students are trying to save the school from shutting down. They look the most basic. 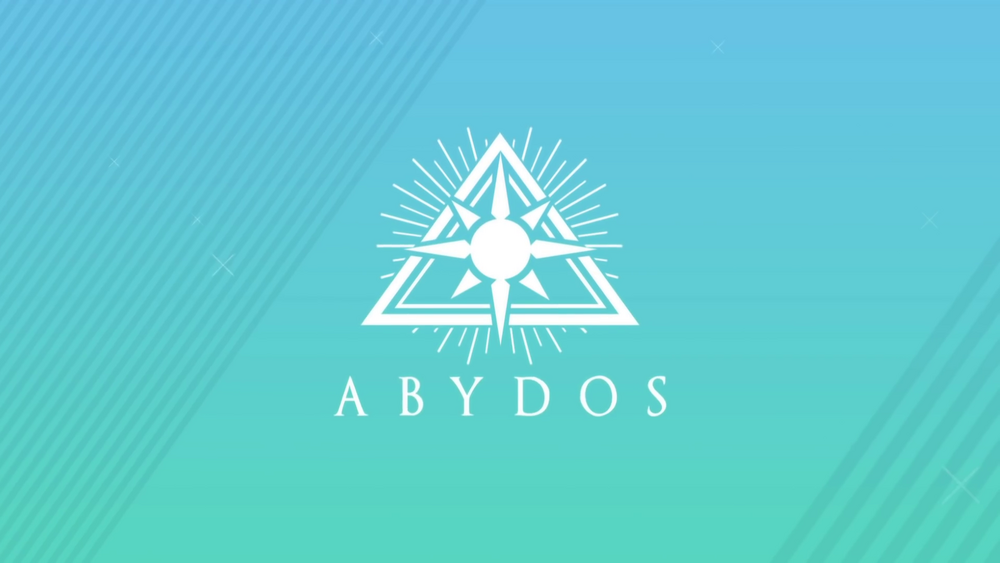 This is the school of nerds. They are all incredibly smart. It’s a science school. From engineers, to game developers. 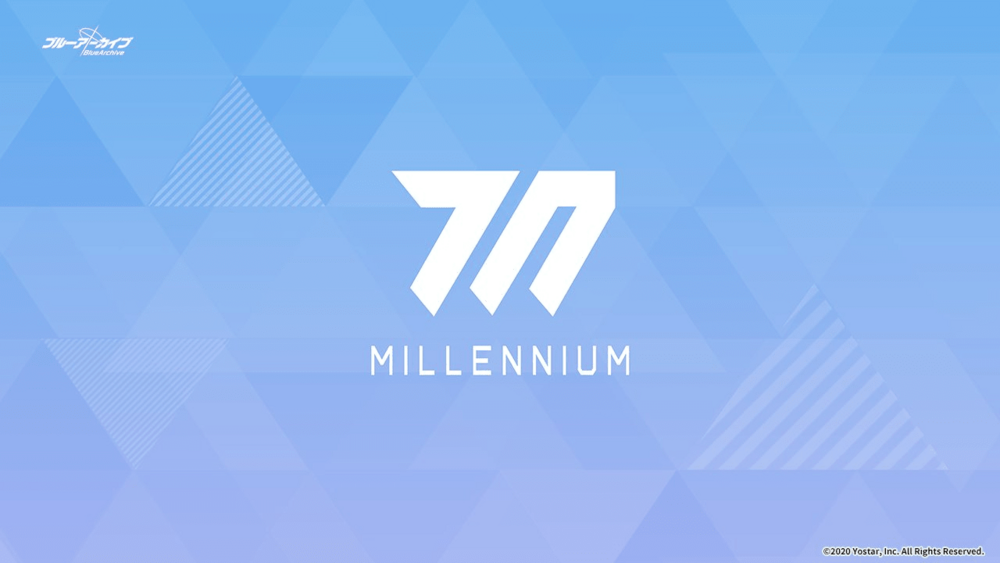 This is your typical ‘evil’ looking school, though they aren’t actually horrible people. You could say they are rougher than the other schools. 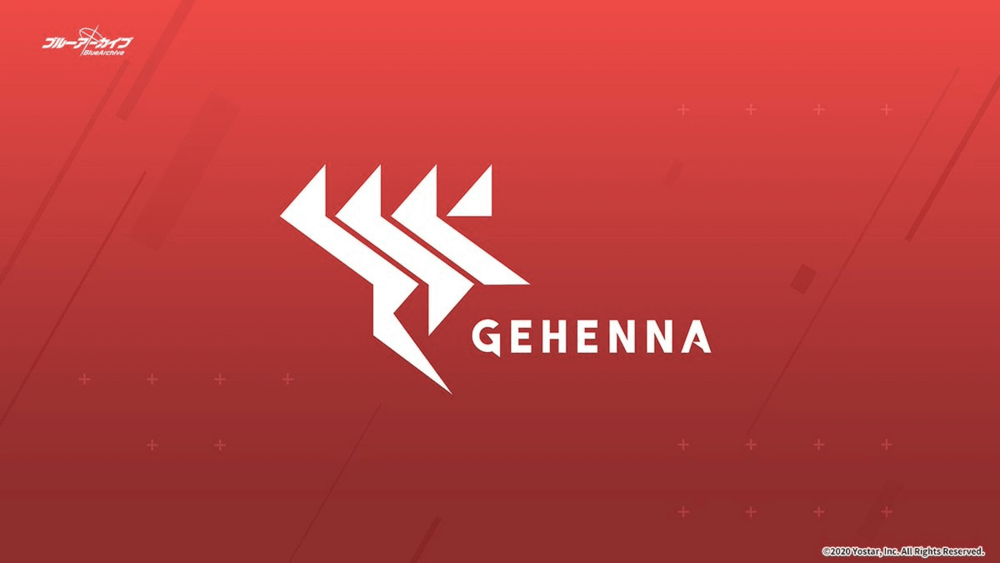 This is supposed to be a school for ladies. They all have angel motifs and like 4 of the 7 healers come from Trinity. So…… Yeah. 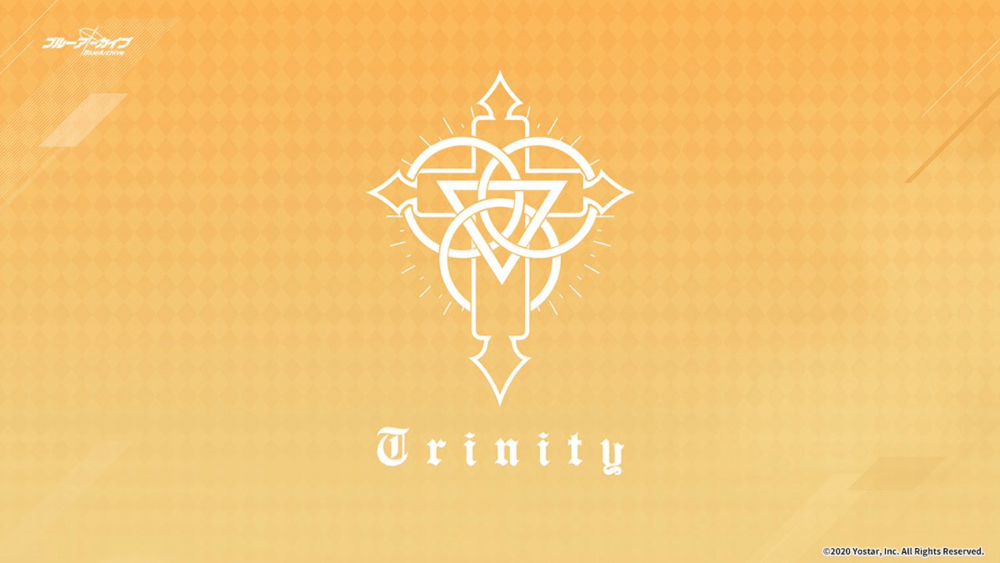 This is like a rural school but themed in Japanese mythology. 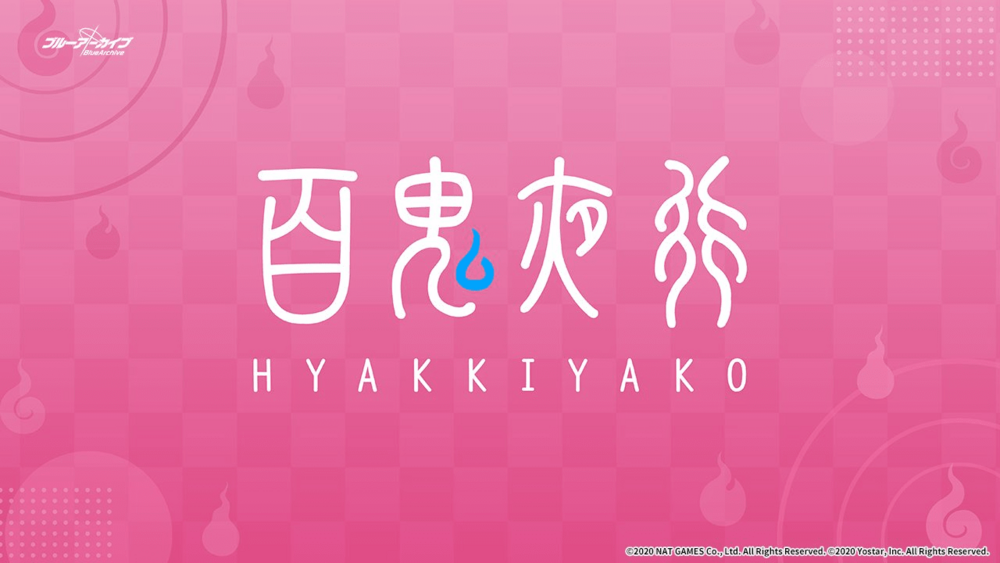 This is another ‘rural’ school but based on Chinese mythology instead. 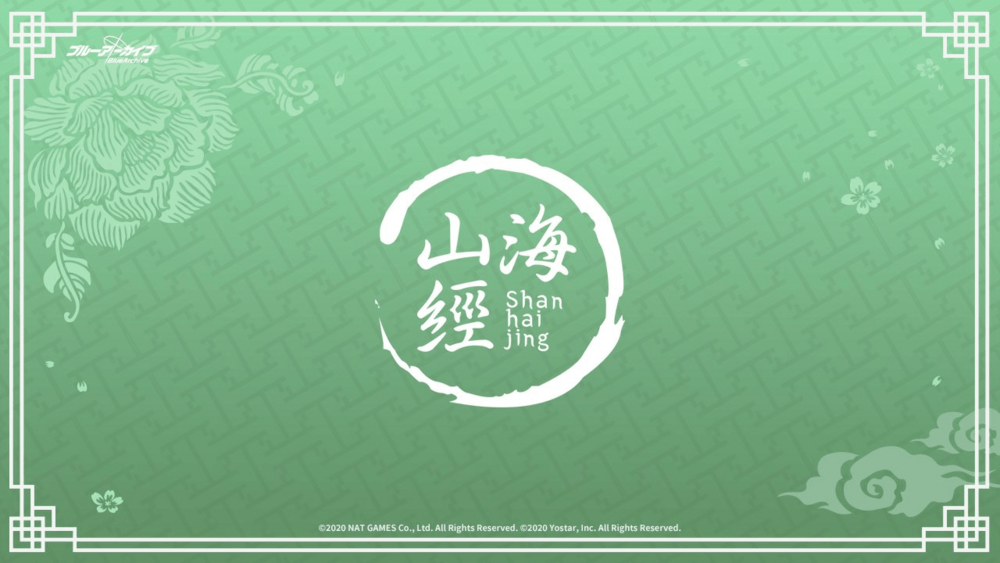 A Russian-themed school. Their whole first event was about a ‘civil war’ that should be everything you need to know. 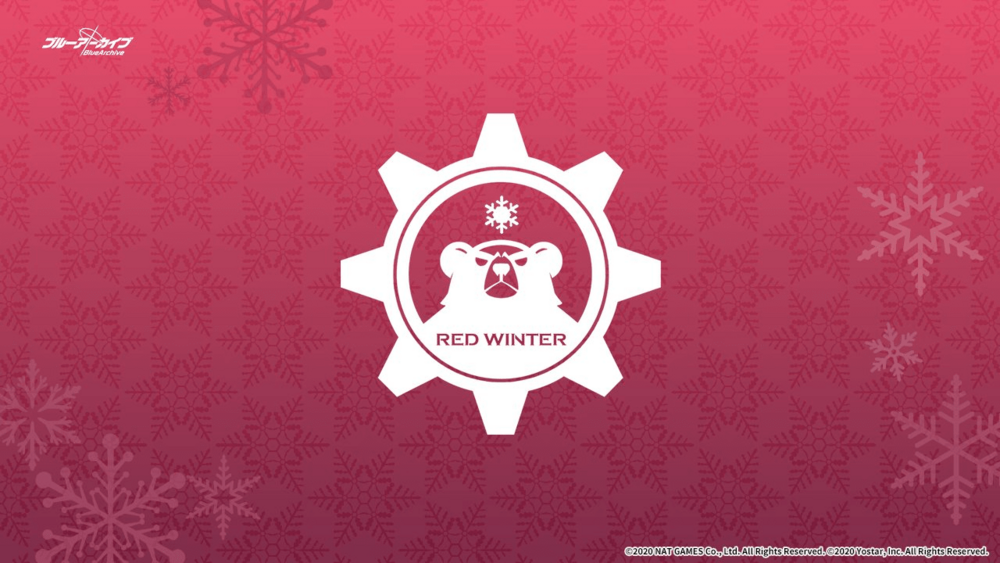 A police academy. Apparently, they struggle with actually controlling situations, so yeah. 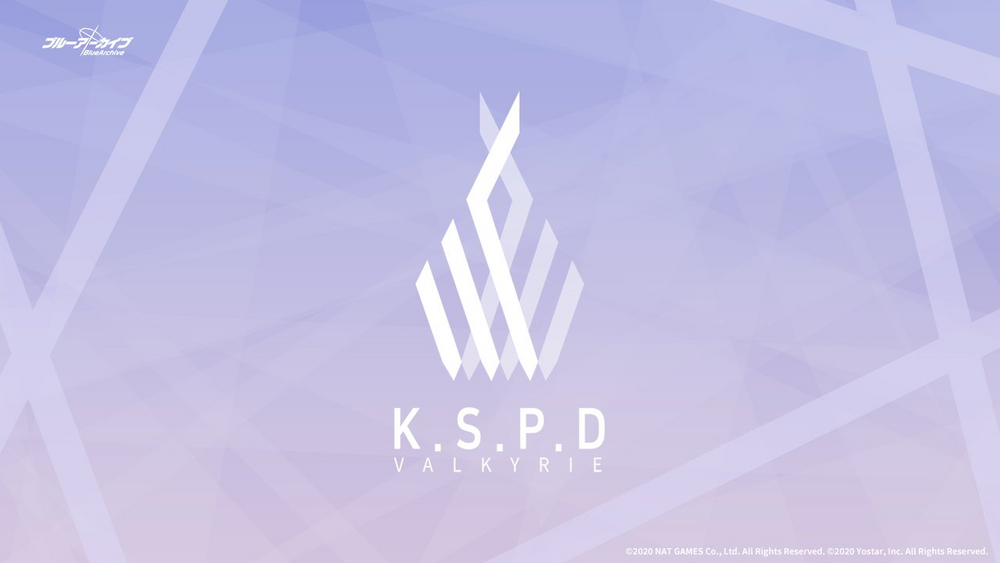 *There is another school named Arius Branch School, but I know nothing about them and they so far only show up in lore/cutscenes. Since I can’t fully read the story I have no idea what they are about. 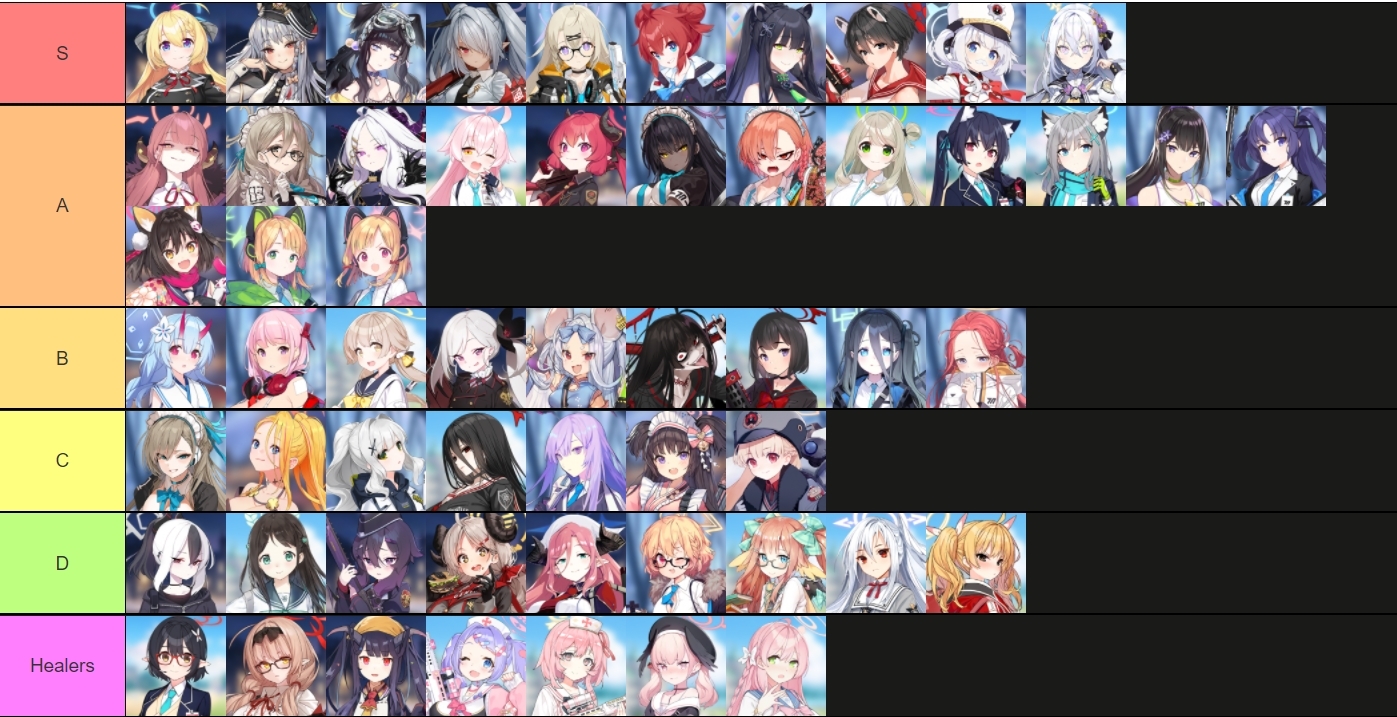 *Healers are in their own tier because they all are good. They each perform differently and serve different roles. Koharu is the only exception since she’s amazing and can solo sustain a team when geared well.

I highly recommend following the official social channels for Blue Archive to keep up to date with the latest game updates and announcements.

Can’t thank you enough, this was so helpful! Now I understand every aspect and problem I encountered so far. Tysm

Blue Archive is a school monogatari RPG developed by NAT Games. The story begins in a school city named “Teyvat”. Players will act as the consultant teacher and lead the students to solve the crises in the city.
8.8
Average User Rating
249 votes
Have Your Say!
Your Rating: 0
Submit
Write A Review
Genre:Anime, Gacha, RPG
Platform:Mobile
Developer:NAT Games
Publisher:Nexon