The lighthouse itself is very easy to build, you simply alternate red and white layers of wool and slowly narrow the building towards the top. I use circles to create the base of the lighthouse and then slowly work my way up. Once in a while I use a smaller circle to narrow to lighthouse a little. If you have difficulties with making circles, please check out guide on how to create circles in minecraft.

I’ve covered the building of the lighthouse in one large image, as it’s much easier to show what I’m doing instead of trying to explain it through text. You can click on the image below to get a large version, but if the images aren’t clear enough, feel free to ask for more details on the forums.

To get the rotating lights, I used redstone lamps and turn them on and off in a sequence. For this particular lighthouse I needed quite a lot of lamps, which can create a lot of lag on slower computers or servers, so I advise you to use the smaller version below on smaller servers or slower computers. 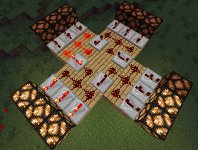 The larger version is pretty much an extension of the above mentioned smaller version. The image below should give you a good view of where everything needs to be placed, with the exception for the redstone torches below the gray wool blocks in each corner, as they can’t be seen on that image. Make sure to place those on the side of the block connected to the redstone repeater in that same corner. 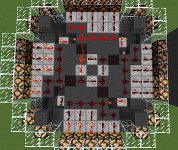 The clock in the middle can be activated by simply placing and destroying a redstone torch very quickly. The best place to do this is next to any of the 2 repeaters with total of 7 ticks, as any other place will usually cause the redstone torch to activate too many wires, which will often either make the lights stay on for too long or it will jam the clock by powering everything.

How Tall is Sundrop FNAF

How to Check Splitgate Queue Time