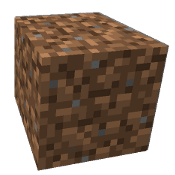 Dirt can be obtained by digging up either dirt, grass, mycelium or farmland. Though using a tool with the silk touch enchantment will give you grass and mycelium instead of dirt. Using a shovel is the fastest way of harvesting dirt, though due to the speed of even stone shovels, using a diamond shovel is often considered a waste, especially when you’re low on diamonds.

A few layers of dirt covers almost everything on land, with the exception of desert biomes, though it’s almost always covered by a layer of grass. Any dirt block adjacent to grass blocks in sufficient light will turn into grass block. The same spread to dirt happens with mycelium blocks.

Dirt can also be found underground, on all depths, and is found on also found on the bottom of almost any body of water.

Unlike sand and gravel, dirt is unaffected by gravity, which can often lead to random floating dirt blocks.

Dirt can be turned into farmland by tilling it with a hoe. Farmland is required to plant seeds. Along with grass and sand blocks, dirt can be used to plant and grow sugar cane, as long as a block of water is directly next to it.

Dirt is not used in any crafting recipes and because farming rarely requires huge amounts of dirt, dirt blocks are often used for terra forming or as a quick blockade against monsters.

Dirt’s explosive resistance is very low, which means you’re often left with a big hole when an explosion occurs.