Here is our list of six of the best team comps for Kuki Shinobu In Genshin Impact.

The reliable deputy leader of the arataki gang is finally here! We now finally have an electro healer in Genshin Impact too, but what is the best team suitable for her?

Compared to our lovely hydro Idol Barbara, which can get frozen if you are not careful, Kuki Shinobu can act as an off-field electro applier and healer. Thus, Kuki Shinobu can become a reliable electro enabler too.

Here are 6 best team compositions for Kuki Shinobu that you can try.

It’s shocking, isn’t it? Since Kuki can act as an off-field electro enabler and healer, you now have flexible electro-charged team comp (or Taser team comp). So if you don’t have Kokomi to act as the healer, or you want to substitute Barbara, you can now pair Kuki together with solid Hydro DPS like Ayato, Yelan, Xingqiu, Tartaglia, Mona, or any other hydro DPS character. You can also use Venti or Sucrose here for the Viridescent Venerer’s res shred and the crowd control skill.

For the rotation, you can activate Kuki’s E skill first, pull them together using Venti or Sucrose’s burst, then finish them off with your Hydro DPS skill or burst.

You can also substitute Xingqiu with Raiden for the battery burst role. Raiden’s kit passive will also buff the burst’s damage outcome. Thus Raiden together with Kuki here is also a solid synergy.

When we talk about electro team comp, one thing that shines well here is physical team comp. Since Eula is a cryo vision user and Kuki is an electro vision user, you already completed the team comp requirement actually. Solid DPS and reliable healer. Thus you can fill the other blank spot with Zhongli for the shielder and additional res shredder, you can also use battery support like Raiden Shogun. If you don’t have Raiden, you can use cryo batteries like Diona, Kaeya, or Rosaria.

For the rotation, you can use Zhongli’s shield first, then followed by Kuki’s E skill or Raiden E skill, then finally use Eula’s E skill first > burst. This way Eula will benefit the res shred from Zhongli and additional physical shred from superconduct reaction too.

Please keep in mind that Venti will not sync well with Eula because Eula will miss most of the attack during Venti’s burst. So Avoid Venti in this team comp!

It’s not complete if you never pair Kuki together with Arataki Itto. In this team comp, Kuki will make sure that Itto will shine the most here. Since we use Gorou as the geo support here, we need at least 3 geo characters to fully utilize Gorou’s buff. And other geo characters like Albedo or Ningguang will act as the geo battery or geo support.

For the rotation, you can use Kuki’s E skill whenever you need healing, spam Albedo’s skill, and use Gorou’s E skill before Itto’s burst. Then for the finishing, use Itto’s burst and just go unga bunga.

For the rotation, use Raiden E skill, Kuki’s E skill and burst, followed by Kazuha burst, then Sara burst, then Raiden burst.

Ah yes, national team. Relatively “almost F2P” general team but on a par with 5* characters team comp too. In this team comp, you would utilize Xiangling’s burst together with Xingqiu’s burst and pull them close together using Sucrose’s burst. Since this team comp heavily relies on elemental reaction, Sucrose’s EM buff will definitely boost the damage outcome. With Kuki’s off-field electro application, when it reacted with Xingqiu’s hydro application and triggered electro-charged, it can trigger overload too if Xiangling’s pyro application managed to react during this electro-charged reaction. Thus, you will potentially see vaporize, electro-charged, overload, and swirl in 1 go. That’s a lot of damage!

For the last team comp, you can use our lovely, emo, small and edgy boy Xiao to plunge the enemies into the void. Because Xiao will always deplete his HP, Kuki’s constant healing here will be very useful. Despite Xiangling and Kuki will trigger overload and potentially spreading the enemies away, this is where Venti’s handy burst will come to play. His burst will group all enemies together, thus Xiao can skewer them all together while we’re starting to blast them with Kuki and Xiangling’s reaction too. With Venti’s here, we don’t need to worry about Xiao’s energy refill too. Thus, this can be another solid team to try if you have Xiao and Venti as your 5* characters.

For the rotation, start with Kuki E, followed by Venti’s E and burst, followed by Xiangling’s burst, and finally Xiao’s burst.

And what was our guide for the best team comps for Kuki Shinobu In Genshin Impact! 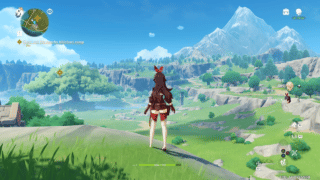