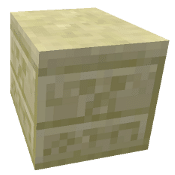 Minecraft Chiseled Sandstone is a variant of normal sandstone. It appears to have a creeper face on it, along with several other shapes under that. It can be crafted by placing 2 sandstone slabs on top of each other in any crafting interface. Decorated sandstone can be used to craft smooth sandstone.

This block is often used, and perhaps intended, as hieroglyphic blocks, due to it’s texture. Many players use this to build Egyptian style buildings, most commonly pyramids as either decoration or part of a custom adventure map.

Minecraft is a sandbox game where players can explore a blocky, procedurally-generated 3D world with virtually infinite terrain, and may discover and extract raw materials, craft tools and items, and build structures or earthworks.
6.9
Average User Rating
61 votes
Have Your Say!
Your Rating: 0
Submit
Write A Review
Genre:Sandbox, Survival
Platform:PC
Developer:Mojang
Publisher:Microsoft
wpDiscuz