Doors are openable blocks which allow you to prevent mobs from entering your base, while still allowing you to go in and out. There are 2 types of doors, wooden and iron. Besides crafting them, wooden doors can be found in villages and both wooden and iron doors can be found in strongholds. Your position matters when placing doors. They’re always placed facing you and they’re always in a closed position.

It’s possible to walk on top of the doors, though it’s a little tricky as the collision box is very thin. Water and lava will not flow through open doors, this means doors can be used as airpockets, as well as easy access path to underwater bases. The holes in the doors allow you to see through them from a safe position, but it’s impossible to shoot anything through it and you cannot push buttons or levers on the other side. 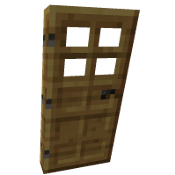 Wooden doors can be opened by the player without the use of a power input. Simply clicking it will open and close it. Redstone power and other switches can be used to open or close it however, which allows for automatic doors.

Zombies can break down wooden doors on hard difficulty and hardcore mode, they will start to bang on it for a while (only sound is heard, they don’t actually move their hands), after which it’ll drop on the ground. However, zombies will only attack closed doors.

Because doors are always placed in their closed state and because they always face you when they’re placed, you can prevent zombies from breaking down your door by placing it against a wall. By opening the door you block the passage, preventing mobs from entering.
However villagers will no longer be able to enter their houses properly if you use this trick on their houses. They’ll stand in front of the door and you’ll hear the door opening and closing, but it remains closed. After a while it does open though most villagers will have bugged out and don’t enter.

Note that zombies are able to hit you through doors, no matter how they’re positioned. Wooden doors are not flammable, despite being made out of wood. They can be placed in lava to stop the flow. Doors don’t require a tool to break it, but axes are the fastest tool to use. You can also simply remove the block underneath it. 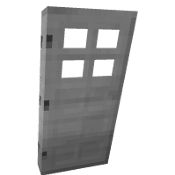 Iron doors can only be opened using redstone power and other switches. The most common switches used are buttons and pressure plates, as they’ll keep the door open long enough for the player to walk through and will close right after. By using an inverter (‘NOT gate’), doors can be made to close when activated, instead of open. But, like wooden doors, placing the door closed against a wall will allow you to ‘close’ it when it’s activated. This is much easier and way more compact than using a redstone circuit.

Iron doors cannot be broken by zombies and they won’t even try to. But villagers cannot operate buttons and levers, so pressure plates are required to allow them back in their house, though this also allows zombies to come in. A pickaxe is required to break an iron door without destroying the item, but it’s often much faster to simply break the block underneath it.

It’s possible to create double doors by placing them next to each other. They’ll door handles automatically face each other, as long as the doors are placed facing you. They have to be opened seperately, either by clicking them (only works on wooden doors) doors or by using pressure plates or levers.