This is our Skyrim: best two handed weapons guide. Find out which weapon is the best!

Skyrim offers a diverse playstyle and has all types of weapons and items for every player. That is one of the main reasons why this classic RPG is so popular. If you want to create a character that uses brute strength to destroy their enemies, you’ll want to use the best two-handed weapons in Skyrim. Well, you’re in luck because that’s exactly what we are going to be focusing on today.

The best two-handed weapons in Skyrim are:

These are the best 5 two-handed weapons in Skyrim in 2022. There are tons of other choices as well but these are the cream of the crop when it comes to obliterating opponents by bonking them on the head or cutting right through them. With that said, let’s dive right in and take a look at what each weapon does in detail and why they are considered the best.

Not only does this weapon look cool but it also has an extremely strong attack. If you use a strong attack, you will release an energy blast that deals a good amount of damage. The best part is that the range on this blast is quite nice which allows you to target ranged enemies despite wielding a two-handed weapon.

If you wish to obtain this amazing sword, you need to talk to Crescius in the Raven Rock mines. He will give you the “The Final Descent” quest where you have to travel to Bloodskal Burrow. Keep exploring the area until you find a corpse. Loot the corpse and you will find the Bloodskal Blade.

The Orcish Greatsword is a massive weapon that deals a lot of damage considering you can get it pretty early on in the game. Once you hit level 6, you can buy this weapon from various Blacksmiths. It also drops from enemies that wield this two-handed weapon. While you might not be an instant fan of it when you first get it, continue upgrading this greatsword and you’ll be amazed at how much damage it deals.

Overall, this is one of the best early game two-handed weapons available in Skyrim. Plus, you can also find this weapon randomly while exploring various Loot Chests spread across the map. For a common weapon, this one sure pack a punch.

Much like its name, this is a cool-looking two-handed sword that not only deals a lot of damage but also is quite memorable thanks to how you can obtain it. Players can get this weapon by completing one of the most infamous quests in Skyrim; “The Whispering Door.” This is one of the darkest quests in Skyrim (we won’t delve into spoiler territory, of course.)

However, after receiving it, you’ll notice that this blade does not do as much damage as we hyped it up. That is because it is not at its full potential at the time you obtain it. To use it properly, you must go on a killing spree and kill 10 people that are friends of the Dragonborn. After successfully completing this grueling task, this blade will be at its maximum potential and will drain 30 HP from each attack.

If you have played the Dark Souls games – or the much recent Elden Ring, you’ll instantly notice that this weapon is similar to the Zweihander. Just like that sword, this is an extraordinary two-handed sword that deals a lot of damage and is surprisingly swift to use. This sword is a must-have for any players that are doing a two-handed build.

This greatsword has a unique effect that deals 30 points of shock damage to the target and 15 Magicka damage as well. This combined with its normal attack damage will instantly kill any low leveled enemies. Plus, this weapon is even useful later on in the game when the enemies get stronger.

For a massive hammer, you might think that it will take a long time to swing it, right? Well, the effect on this Warhammer allows you to swing it 30% faster than the average hammer. Due to this effect, The Longhammer is better than the Daedric Warhammer in terms of damage per second (DPS). If you are curious to know how you can get it, worry not because we’ve got you covered.

To get it, you must start the “Liar’s Retreat” quest and loot it next to the corpse of Rahd. Since this Warhammer is resting beside his corpse, it is quite clear that he wielded it till the very end; making it a legendary two-handed weapon to use.

Those are the 5 best two-handed weapons in Skyrim. Depending on what your playstyle is, you need to try out these weapons to see what suits you best. If you want to destroy the enemies standing in your way, then going for The Warhammer might be a good choice since it not only deals tons of damage but also has amazing DPS as well. 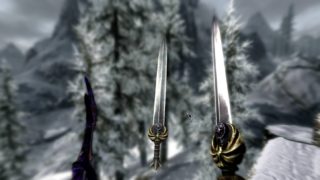 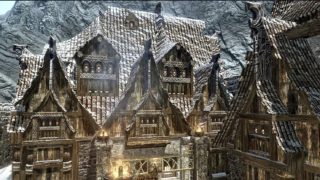 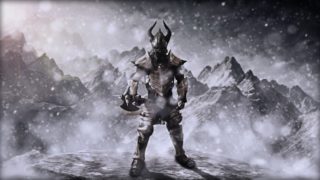