FIFA 23 is on the horizon, and we’ve decided it’s time to update our old Best Young LB LWB FIFA 22 list with the latest and greatest young left backs in the world right now. These ratings are mostly predicted as of now, however some have been leaked by EA. With that said, let’s dive into our new Best Young LB LWB FIFA 23 guide!

It’s that time of year again, FIFA 23 is here and Career Mode is looking more exciting than ever with the new features. Negotiations have never been more in depth, but who exactly should you try to purchase?

This list will cover the best young left backs and left wing backs you can get for your Career Mode squad. Each wonderkid included is under the age of 21 as well.

Left backs have been used in a variety of ways over the years, evolving from pure defenders to players who may change the game in the attack.

While you may see some familiar faces (we’re looking at you, number one on the list) there are plenty of hidden gems that may have flown under your radar. Players with so much potential you’ll want to have them on your squad just so you don’t have to face them! Let’s take a look at the best young left back and left wing back wonderkids in FIFA 23:

La Masia product Álex Balde is a pretty well-known player as it is. Coming through Barcelona’s academy adds a little bit of fame to any player’s name, and Balde deserves it. He’s played for Spain on an international level since he was 15, nailing down the left flank.

Alex Balde is fast, insanely fast. If he doesn’t get the first ball, he’s sure to win the second. What he may lack in physical strength, he more than makes up for in his technical ability. His dribbling is very good, which is no surprise coming from one of the best academies in the footballing world.

If you’re in need of a left footed playmaker to hold down your fullback position, Álex Balde is a great choice!

The first French full back to make our list, Adrien Truffert is strong defensively with great dribbling skills to boot. He’s currently playing in his native country of France for Stade Rennais, and has played on an international level for the French youth system.

Adrien Truffert has already had a very exciting start to his career. In his debut against French giants Monaco, Truffert came on in the 41st to absolutely change the game. He assisted the goal that brought everything level and then went on to score the game winner himself!

Truffert is an exciting full back dominated Rennes’s left side, maybe for years to come. That is, unless you buy him and add his firepower to your FIFA Career Mode!

A magician with the ball at his feet, Quentin Merlin has earned the number 8 spot on our list due to his great potential. Merlin is another French left back who has gotten some games internationally on a youth level. He currently plays for FC Nantes in France, contributing with deadly crosses and expertly timed tackles.

Not many left backs are as good on the ball as Quentin Merlin. A player with Europa League experience, Merlin helps his team attack while making sure to press his opponents with force.

If you’re in need of a wizard to bring the attack from the back, Quentin Merlin is the left back wonderkid your FIFA Career Mode needs.

A veteran of lists like these, Devyne Rensch has been known for his promise and potential for quite some time. Still only 19 years of age, this wonderkid could really hit the heights of some former greats.

Devyne Rensch is a defender from the Netherlands playing in his native country for world famous club Ajax. He’s one of the fastest players on this list and loves taking a player on! One of the most aggressive full backs to be covered today, get Rensch if your defense needs a little more… attack.

At only 19 years of age, Rensch is a great choice for FIFA Career Mode managers looking to invest in their futures!

The first South American to feature on this list, Piero Hincapié is one to watch. He’s an Ecuadorian playing for German club Bayer Leverkusen and his pace is something to be noted.

Piero Hincapié already has enough European experience through playing in the Europa League to get into bigger clubs. He even scored his first goal for Leverkusen in a 4-0 Europa League demolition of Scottish club Celtic.

Hincapié is rapid and a tank defensively, wingers coming down his flank learn quickly not to try and take him on. Pick him up if you’re looking for an expert at winning the ball back, at only 19 years of age!

The first player on our list to grace the grasses of the Premier League, Aaron Hickey is an exciting prospect to say the least. A Scotland international with 4 caps for his country, Hickey will surely be known by every football fan sooner rather than later.

Aaron Hickey has already seen moments in his career others may call highlights. He scored his first senior goal in a thrilling derby against then rivals Hibernian in Scotland! He’s since dominated the Serie A, earning him a move to Premier League hopefuls Brentford.

Hickey is known for his pace, defensive positioning and stamina. If you want a player with a third lung on your left side, Hickey is the full back for you!

Another left back playing in the English Premier League, Rayan Aït-Nouri is a 21 year old with potential. He was initially loaned to Wolverhampton Wanderers from French club Angers SCO before he was purchased by Wolves. They love him, and it’s easy to see why. While not the strongest left back on this list, he makes up for his lack in strength with high pace and great ball retention.

Rayan Aït-Nouri is another player who scored on his debut, hitting the back of the net in a 2-0 victory over Crystal Palace. Internationally, he has helped the French youth teams at both a U18 and U21 level.

Aït-Nouri is only 21 and already a nailed on starter for a club competing in one of the best leagues in the world. Buy this player if you want some experience in your FIFA Career Mode.

An already well known player, Nuno Mendes started to make a name for himself at Sporting and cemented himself as a full back with potential in Paris. A regular for European giants PSG, Nuno Mendes has been one to watch for quite some time. Playing in a team with the likes of Mbappe, Neymar and Lionel Messi, Mendes still finds a way to shine.

Nuno Mendes is absolutely rapid, storming up and down the left side of the pitch all game due to his enormous reserves of stamina. It’s no wonder Paris Saint Germain bought him for a whopping €38 million!

An agile and well balanced attacking full back, get Nuno Mendes if you want a player who is already established and have plenty of cash to spend!

Linked with the likes of Chelsea and English champions Manchester City, it’s no wonder why Joško Gvardiol is wanted by the world over. At only 20 years of age, he could potentially be dominating the left side of matches for over a decade. He’s currently in the Bundesliga for club RB Leipzig, who are also regulars in the prestigious and competitive Champion’s League.

Joško Gvardiol can sprint with the rest of them, and the way he moves you’d be forgiven for forgetting that he’s also an absolute rock physically! Many consider him to be a solid ball playing defender as well, destroying enemy midfields with a single pass.

If you don’t get Joško Gvardiol for your FIFA Career Mode squad, someone else surely will.

A household name in his native country of Canada, Alphonso Davies has won the world’s hearts with his generosity and won many games with his overwhelming ability. Davies is an enigma of a player, he has the potential to be so much better than he currently is while currently being world class! Like a Ferrari that could somehow go faster Davies is not only the best left back on this list, he may be the best left back in the world.

The Ferrari comparison wasn’t by accident, on his day not one player could beat him 1 on 1. His dribbling is elite, with ball skills like his, don’t be surprised to see Phonsie in the midfield!

Alphonso Davies is already starting for German champions Bayern Munich, if you want to add his world class ability to your FIFA Career Mode be prepared to spend a pretty penny!

Here’s a simplified list of the top 10 best young left back wonderkids in FIFA 23.

That’s it for our best young left backs and left wing back wonderkids in FIFA 23. Each player on this list is under 21 with almost limitless potential, any of them will improve your Career Mode squad for years to come! 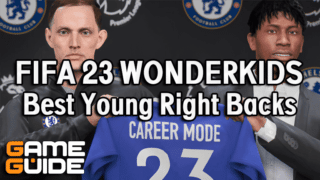 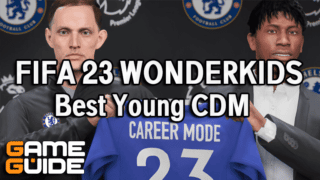