This is a complete Figure Fantasy tier list for every figurine currently available in the game. It is based on the ratings from players on the original Japanese (JP) version.

We’ll keep this list up to date and adjust it if necessary once the global version of the game has been released.

Looking for more gacha gaming content? Read our Blue Archive tier list guide to see which heroes are rated the highest, and also check out our Revived Witch tier list page for a complete tier list of all dolls in the game.

Rerolling in Figure Fantasy is fairly straightforward. Note: this only works on Android devices.

You can actually get another roll when you’ve cleared 3-24. However, it’s just not worth the time investment to do it.

You can only pull a maximum of one Ultra. Also, this has not been confirmed, but apparently you can only get the following Ultra figurines from the first pull:

The only figurine you don’t really want to pull from this selection is Midori.

It should be noted rerolling in idle games doesn’t really have a huge benefit as you need dupes to upgrade them anyway. The fact that you can only pull from a very limited pool also degrades the need for it. TL;DR don’t sweat it if your first pull isn’t great.

A really strong early combo is Yuki & Ume Mizuno. The reason why they’re strong is down to Yuki’s passive, so you’ll need to unlock that first. Also, as these are both “Super” figurines, so they will drop off in power eventually, but for the very early chapters they’re really good.

A good starter team would be something like this:

This is the main tier list. You filter the figurines by Class, Brand, and Rarity.

There are four different classes in the game.

A melee class that has the abilities to defend against and control enemies, restore their own health and protect ally units.

Defenders are tanks that stand on the frontline and protect their team. They strengthen the defense of both themselves and allies, while also controlling enemies.

They have great durability from increased stats such as defense and self-healing. Combine them with a helper and they can survive for a long time.

A melee class that has balanced damage-dealing and defense abilities, and can also threaten the enemy backline.

They tend to have high attack speed and some of them can increase their evasion with skills. This allows them to dodge enemy attacks and nuke them down.

A ranged class that can attack enemies in various ways and deals a great amount of damage in suitable conditions.

A ranged class that can deal a great amount of damage and provides buffs for allies and debuffs for enemies to enhance the team’s overall damage-dealing ability.

A ranged class that has an extremely strong ability to support and provide buffs that enhance nearby ally units at the start of each battle.

There are five different brands in the game. This is basically a figurines faction.

Designed and produced by “TENMA” Business Division of FULI Corporation.

Designed and produced by “GALATEA” Business Division of FULI Corporation.

The personal brand of prototype artist “SNOW-A”, who designs and produces all its products.

The personal brand of prototype artist “NIGHT-9”, who designs and produces all its products.

Using figurines of the same brand during a battle can grant all team members a buff.

Deploy 3 figurines of the same brand to grant property bonuses for all allies.

Deploy 4 figurines of the same brand to grant property bonuses for all allies.

Deploy 5 figurines of the same brand to grant property bonuses for all allies.

Substitutes for any brand figurine to gain a brand bonus; each SNOW-A figurine deployed adds 3 Initial Energy to all allies.

Substitutes for any brand figurine to gain a brand bonus; each NIGHT-9 figurine deployed reduces all enemies’
Initial Energy by 3.

Each brand of figurines is both strong and weak against certain other brands.

The doctor’s research on extracting new energy from the fungus harmed the interests of the old energy empire, whose people kidnapped Doctor’s daughter Sakura. To save her, a twin mushroom in the laboratory Petri dish turned into girls to launch a series of rescue plans.

The desert-island bioengineering laboratory caused the spread of a virus, “Cerebrum”, due to illegal research. The mercenary girls belonging to the Supervision Bureau had virus antibodies in their bodies, and flew there to continue investigating the source of the virus while fighting each other.

In the highly technologically advanced future, a driver can use his special nerves as a medium to control mechs with his mind. However, the first mech unit named “Horizon One” stole the driver’s mind and launched a revolution named “Endtime”.

Mankind seeks to integrate themselves with mechas-soon, this zealous pursuit has spread around the world like wildfire, becoming an insane desire that causes the formation of a dark force. Now, it’s time to reveal the truth behind all this craziness and save this world that is teetering on the brink of collapse.

In a world that is separated from time and space where the Three Kingdoms Period, the Sengoku Period and the modern era become entangled with one another, you, as a time-traveler, will play the role as a famous ancient general in the battlefield in which the historic events are reenacted.

During the High-school League of Martial Arts, combat clubs of different high schools battle fiercely for the championship. The story revolves around the competition between Violet Academy, where delinquent students reign, and Nishimoto Academy, an elite school, for the qualification to enter the knockout stages…

If you’re hyped for the game, I highly recommend following the official Figure Fantasy Facebook page to keep up to date with the latest game news and updates.

keep in mind the SSR units only shine after at least level 141, some even later at 161 or 181 when they unlock certain effects of their skills. So do not judge a unit on your first or maybe second day using them. 1 tip is the purple figures are extremely strong after map 9.1 with the unlock of collection bonus.

is it worth it to change my Alfred into Yamazaki? I haven’t use Yamazaki though but people said he is bad

Alfred is a frontline dps and semi-tanker, when Yamazaki is like an backline assassin. It depend on what u need for your team. Just my opinion

Can you do a Build guide or team comp guide? Im currenting running, Yoko, Ember, Erikzia, Kazue and Harriet…

I can confirm you can get other Ultra’s first. My first Ultra was Erikzia. 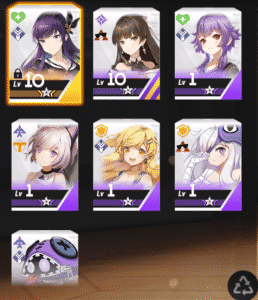 None
Reply to  Erikzia first

My was zephyr, and she is good too

Suzumi is 3x better than Harriet, Harriet is super bad, Whoever made this list, lost his mind or never tried them in battle.

Bruh this Suzumi is a vanguard and Harriet is a specialist what are you saying. Suzumi is a low tier because it’s based on vanguards. Harriet and Suzumi is not on the same class and the list is about tier by class.

i just got megan from the beginners 10x pull. its not just those 5 ultras listed above.

Can you please add Aoi and rate her ?

What happens when you put Toy Story together with a gacha game? You get Figure Fantasy! Collect figurines and battle with them in this Mobile RPG by KOMOE.
8.6
Average User Rating
86 votes
Have Your Say!
Your Rating: 0
Submit
Write A Review
Genre:Anime, Gacha, Idle, RPG
Platform:Mobile
Developer:KOMOE
wpDiscuz