Wondering how to Backstab in Elden Ring? Backstab is a returning mechanic from previous FromSoftware games. Backstabs deal critical damage; follow this guide to backstab enemies and boost your critical damage effectively.

Backstabs are one of many returning mechanics from previous From Soft games. Backstabs can be performed by carefully sneaking behind enemies back and pressing the light attack button. You can only backstab enemies that are almost equal to the size of your character or have humanoid body structure.

Backstab in Elden Ring is a critical hit. This scales with the weapons critical damage scale and weapon level. A weapon that is fully upgraded and has a better critical damage stat will do more damage to the enemies. You can maximize backstab damage with the help of a certain talisman and weapons.

You can perform a backstab on enemies by carefully sneaking behind them and pressing the light attack button dealing critical damage. Depending on the platform you are playing, the button for light attack can be different on Playstation, Xbox, and PC.

Why do Players Need to Backstab Enemies?

A viable and strong build can be made to utilize backstab, parry, and riposte mechanics in the Elden Ring. It is a very good way to begin a fight dealing a lot of critical damage and quickly switching to another weapon for the rest of the fight. Backstabbing and riposting deals a lot of damage both in PVE and PVP.

How to Backstab Enemies in Elden Ring

You can follow this guide to backstab enemies on all platforms Elden Ring is available on.

Both Xbox One and Series X/S share a similar controller between them. You can get behind the enemy you want to backstab and press the RB button you backstab the enemy. You can also hide in a bush or around the corner and wait for the enemy to face the other way in order to backstab as enemies can not detect players hidden in bushes.

PC players will have to right-click on their mouse to backstab an enemy. We recommend that PC players use a controller for the best experience in Elden Ring as buttons mapped to the keyboard and mouse can be annoying.

Start from the waygate that teleports you to the Audience Pathway before Rykard, Lord of Blasphemy. Head back and go upstairs. Use two Stonesword Keys and pass through the fog gate. After entering the hanging cage room, turn right and drop down. Follow the path and you will find the Dagger Talisman on a corpse. (Courtesy: Fextralife)

Initiating the fight with a backstab can make the rest of the fight quite easy, here are the weapons with the highest critical damage.

Miséricorde has the highest critical damage of 140 of all the weapons in the Elden Ring. This is a very good weapon for short-range melee combat. It is an excellent weapon for both backstabbing and riposting.

This weapon can be found very early in the game in Stormveil Castle. Make your way to the fortress with the Grafted Scion. This can be looted off a corpse that can be found in the large armory room, you will need a Stonesword key to insert in the Imp statue to open the fog wall.

This weapon is extremely easy to obtain, you can buy this weapon from Twin Maiden Husks at the Roundtable Hold for 300 runes. The dagger has the lowest DEX requirement of any weapon and it can be used by all starting classes. This weapon can be dropped by Highwaymen and different types of Foot Soldiers.

This weapon has a unique ash of war which increases its attack power. It has B scaling in strength when fully upgraded and it is also viable for most strength builds.

This is the best weapon in the greatsword class for backstabbing and it has a critical damage rating of 110. You can obtain this weapon quite early on by heading towards gatefront ruins. can be looted from a chest in the back of a Carriage, located along the western road leading out of Gatefront Ruins. 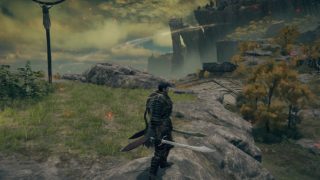 How to Dual Wield in Elden Ring