Piglin bartering in Minecraft is challenging, but it’s also quite fun and can get you a lot of valuable resources. Today, we will guide you through the Minecraft ultimate Piglins Bartering guide!

What Are Piglins in Minecraft?

Piglins are a neutral mob added in the Minecraft 1.16 Nether update along with other cool features. Besides creating an excellent atmosphere for the Nether dimension, piglins have many unique traits.

One of them is the ability to give you a random thing if they receive a gold ingot. You can call Piglins, the gold lovers!

Also, don’t make a mistake by not recognizing piglins with zombified piglins since they look nearly the same. The piglins are more alive with fresh skin, while the zombified piglin looks like a zombie version of the piglins.

You can find piglins spawn commonly in the Nether dimension, especially in the crimson forest, bastion remnants, and nether wastes biome. They usually spawn with a sword or crossbow in hand, so it’s hard to miss them!

Since they love gold, you must love gold too! If you go around the piglins without any gold armor, you will be attacked and surrounded by them. And the obsess about being robbed makes them more nervous and will attack you if you open any chests and shulker boxes around them. So be prepared!

With that being said, the only unique feature about Piglins we want to cover in this article is bartering with the piglins. While you have villagers in the overworld, you can now trade with the piglins in the Nether dimension.

Here are the steps to barter with the piglins!

Before entering the Nether, you may want to bring some gold ingots that you just mine from the overworld with you. If you have any gold ores or blocks of gold, just turn them all into gold ingots.

Remember to save some to make yourself a gold helmet or boots. This will protect you from the piglins and also sacrifice as small amount of armor point as possible.

Build the Nether portal and light it up with the flint and steel. Then step in! You want to look for the crimson forest, which is the red and dark forest with dense dark red fog, or the nether waste, which is quite common.

Wandering around enough and you will notice piglins will spawn. Try to approach them and avoid other hostile mobs like ghasts, magma cubes, and hoglins.

If you want more gold or forget to bring gold ingots, you can look for Nether Gold Ores and mine them. They will drop 2-6x gold nuggets per ore and up to 24x gold nuggets if you have Fortune III enchantment.

You can start bartering with the piglins by throwing the gold ingots to the ground. The piglins will then run and pick it up. After 6-8 seconds of waiting, it will give you a random item as a reward.

You can also give gold ingots straight to the piglins instead of dropping them to the ground. First, make sure the piglin’s hand is empty. Then, select the gold ingot, look at the piglin, and right-click on it.

Alternatively, you can use the dispenser to shoot the gold ingots to the piglins. But this is only efficient if you build an automatic piglins bartering machine.

What You Can Get from Piglins Bartering?

Since you can make a massive gold farm in the Nether to farm gold ingots, piglins bartering can also be automated and farmed! And this is the only source to produce an unlimited amount of nether quartz, soul sand, nether brick, gravel, blackstone, and crying obsidian.

Here are the items you can get from piglins bartering!

FAQs about Piglins Bartering in Minecraft

Can You Barter with The Piglin Brutes?

Although they look familiar, you can’t barter with the piglin brutes. In another way, be super careful when dealing with those guys since they can two hit you, even with a full armor set.

Can You Barter with The Baby Piglins?

Baby piglins can take the gold ingot you give but will not give anything in return. So make sure to lure the adult piglins to the corner before bartering with them.

What is the rarest trade from a Piglin?

The rarest trade from the piglins is the Soul Speed enchanted book, with a 1.09% chance. This enchantment makes you run faster on soul sand and soul speed.

Piglin bartering isn’t that hard, right? If you already have a lot of gold ingots and don’t know what to do with them, give this guide a try! 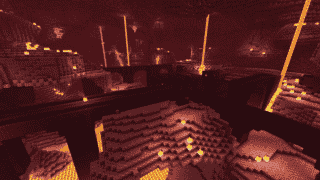 How To Respawn On The Nether Roof In Minecraft

How to Survive the Nether in Minecraft 2022 (August)